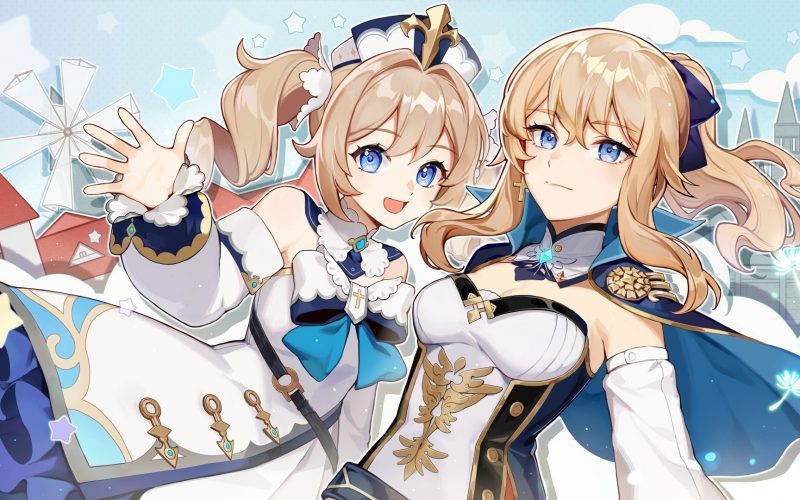 We will issue compensation to all Travelers via in-game mail within 5 hours from the end of maintenance. Please log in to receive the mail by November 14, 2020 11:00:00 (UTC+8). The mail will be valid for 30 days, so don’t forget to claim the compensation before it expires.

New Characters
5-Star Character “Childe” Tartaglia (Hydro)
Vision: Hydro
Weapon: Bow
No. 11 of The Harbingers, also known as “Childe.” His name is highly feared on the battlefield.
His Elemental Skill, Foul Legacy: Raging Tide, unleashes a set of weaponry made of pure water that deals Hydro DMG to surrounding enemies.
His Elemental Burst, Havoc: Obliteration, unleashes either “Flash of Havoc” or “Light of Obliteration” based on the Stance he is currently in.
4-Star Character “Kätzlein Cocktail” Diona (Cryo)
Vision: Cryo
Weapon: Bow
A young lady who has inherited trace amounts of non-human blood. She is the incredibly popular bartender of the Cat’s Tail tavern.
Her Elemental Skill, Icy Paws, deals Cryo DMG and creates a shield on hit
Her Elemental Burst, Signature Mix, tosses out a special cold brew that creates a Drunken Mist, dealing Cryo DMG to enemies and continuously regenerating the HP of characters within the AoE.
During the event wish “Farewell of Snezhnaya,” from after the Version 1.1 update to December 1, 2020 at 15:59:59 (Server time), the event-exclusive 5-star character “Childe” Tartaglia (Hydro) and the 4-star characters “Kätzlein Cocktail” Diona (Cryo), “Uncrowned Lord of Ocean” Beidou (Electro), and “Eclipsing Star” Ningguang (Geo) will have their Wish drop-rates greatly increased!

The Test Run character trial event will be available from after the Version 1.1 update to December 1, 2020 at 15:59:59 (Server time). Travelers can use fixed team compositions that contain the trial characters to complete designated challenges. Once the challenge is complete, you can obtain the corresponding rewards!

Royal Spear (4-Star Polearm)
Polearm
This polearm was once cherished by a member of the old nobility that governed Mondstadt long ago. Although it has never seen the light of day, it is still incomparably sharp.
Damaging an opponent gradually increases CRIT Rate through Focus. A CRIT hit clears all Focus effects.
*The weapon Royal Spear (4-Star Polearm) will be available in Starglitter Exchange in the Shop.

New Systems
City Reputation System
Reach Adventure Rank 25 and complete the corresponding quests to unlock this system
Reputation is currently divided into Mondstadt Reputation and Liyue Reputation.
Mondstadt Reputation Unlock Criteria: Complete the Archon Quest Prologue: Act I “The Outlander Who Caught the Wind.”
Liyue Reputation Unlock Criteria: Complete the Archon Quest Chapter I: Act II “Farewell, Archaic Lord.”
Travelers can speak to Knights of Favonius Coordinator, Hertha and Ministry of Civil Affairs Secretary, Ms. Yu to take on new Bounties and Requests. You can also collect Reputation EXP rewards from them for World Exploration, Mondstadt Quests, and Liyue Quests.
As you increase your Reputation Level, you will unlock special city features, recipes, gadget blueprints, namecards, wind gliders, and other rewards.
Gadgets
Anemoculus Resonance Stone: Use this to mark out areas where Anemoculi within a certain range are located on the map.
Geoculus Resonance Stone: Use this to mark out areas where Geoculi within a certain range are located on the map.
NRE (Menu 30): Equip this to quickly consume food without opening your Inventory. This gadget can hold one variety of HP-recovery dish and one variety of revival dish. NRE (Menu 30) will automatically offer the dish that best matches your party’s situation at any given time.
Wind Catcher: Equip this to store the energy of Anemograna and use it to create a wind current (cannot be used while in combat).
Portable Waypoint: Use the Portable Waypoint to create a temporary waypoint at your current location. This waypoint will last for 7 days. (Only 1 such temporary waypoint can exist at any one time.)
Condensed Resin: Consume 40 Original Resin to create 1 Condensed Resin. Condensed Resin can be used to revitalize Ley Line Blossoms and Petrified Trees in Domains that require 20 Original Resin, yielding 2 sets of rewards at one time. (Both sets of rewards are random.)
Adepti Seeker’s Stove: Use this gadget to create a portable stove in front of you.
Anemo Treasure Compass: Upon use, a prompt will appear directing you towards the nearest chest in the vicinity. Only usable in the Mondstadt region.
Geo Treasure Compass: Upon use, a prompt will appear directing you towards the nearest chest in the vicinity. Only usable in the Liyue region.
City Features
Mining Outcrop Search: Talk to Wagner the Blacksmith in Mondstadt or Master Zhang the Blacksmith in Liyue. They will tell you where to find ore deposits in the region, and markers will appear on your map.
Merchant Discounts at Good Hunter, Mondstadt General Goods, Wanmin Restaurant, and Second Life.
Namecard Styles
Mondstadt Reputation Namecard Styles: “Mondstadt – Hero’s Fame” and “Mondstadt – Blessing.” Liyue Reputation Namecard Styles: “Liyue – A Thousand Ships” and “Liyue – In the Clouds.”
Recipes
Mondstadt Recipe Rewards: Northern Apple Stew, Adventurer’s Breakfast Sandwich, and Moon Pie
Liyue Recipe Rewards: Golden Shrimp Balls, Lotus Flower Crisp, and Tianshu Meat
Wind Gliders
Mondstadt Reputation Wind Glider Reward: Wings of Azure Wind
Liyue Reputation Wind Glider Reward: Wings of Golden Flight
How to Increase Reputation
Region Quests: Complete various quests in Mondstadt and Liyue to increase your Reputation in each city.
World Exploration: Increase your Exploration Progress in Mondstadt and Liyue. Once you hit certain milestones, you can increase your Reputation in the corresponding city.
Bounties: Hunt down and defeat the bounty targets to increase your Reputation in that city. Each week, you can complete up to 3 bounties in total across all cities.
Requests: Complete requests from the local residents to increase your Reputation in that city. The list of requests will be refreshed every Monday. Each week you can complete up to 3 requests in total across all cities.
Exploration Progress System
Zoom out on the map to view the Exploration Progress for each area. Open chests, find Elemental Oculi, unlock Waypoints, and complete other exploration activities to increase your Exploration Progress in each area.
Archive System
A collection of Equipment, Materials, Geography, Books and Tutorials.
Equipment: View the equipment in this version and the ones you have unlocked.
Materials: View the materials, food, potions, trophies, and gadgets of Teyvat.
Geography: Interact with specific Viewpoints to add these locations to the Geography section of the Archive.
Books: Read the books that you have collected here. A portion of the books in your Inventory will be moved to the Archive and will no longer remain in your Inventory.
Tutorials: View the tutorials that you have triggered throughout your adventure.
Character Archive System
Character Archive added.
Other New Content
Gameplay
The following recipes are now available for purchase:
Wanmin Restaurant: Triple-Layered Consommé
Wangshu Inn: Bamboo Shoot Soup
Added new achievements under “Challenger – Series II”
New Harvestable Resources: Bamboo Shoot and Golden Loach
New Monster: Unusual Hilichurl
Settings
Added customization options for keyboard and controller: Go to Paimon Menu > Settings > Controls, select a function to change the key or button assigned to it, and press any key or button to assign it to this function.
New customization options added to Settings > Graphics: Volumetric Fog, Reflections, Bloom, Crowd Density, and Co-Op Teammate Effects.
New options added to Settings > Other: Combat Camera Settings and Default Camera Distance.
System
Added an Equipment Locking function. Locked equipment cannot be used for enhancement or refinement.
A Report function has been added to Co-Op Mode
Adds a feature to weapon/artifact enhancement screen that displays item descriptions for items added as enhancement materials.
During weapon enhancement, surplus EXP is now returned in the form of weapon enhancement materials (previously, surplus EXP was lost).
Characters dispatched on expeditions are no longer out-of-action. They can be added to your party as usual.
■ Fixes and Optimizations

Monsters
Optimizes destination selection logic for Geovishap Hatchlings and Whopperflowers when tunneling during combat near bodies of water.
System
Optimizes how equipped items are displayed: Artifacts and weapons now display the equipping character’s avatar.
Optimizes categorization in the “Bosses” tab in the Adventurer Handbook: Bosses are no longer categorized by region, but by monster type.
Optimizes inventory capacity display: Removed load limit and replaced with Inventory slots. Slots are divided into 3 categories — 2,000 for weapons, 1,000 for artifacts, and 2,000 for other materials. Identical materials will still stack in the same slot. When all Inventory slots in a given category are full, no more items in that category can be acquired and you will have to clear some slots.
Increases Original Resin limit from 120 to 160.
Other
Reduces Origin Resin consumption requirement in the Battle Pass Weekly Missions from 1,600 to 1,200.
Amends the banner for the standard wish “Wanderlust Invocation.” (Wish contents and rules remain the same, only the Wish banner has been amended.)
Adjusts the unlock criteria of the story quest “Astrolabos Chapter: Act I.” To unlock this quest, players must now first complete the story quest “Trifolium Chapter: Act I.”
Adjusts the names of some achievements.
“Adjusts the reward eligibility for Pre-Registration Rewards and 10 Million Global Pre-Registrations Reward: removes the original restrictions on eligibility.
The new eligibility criteria for claiming Pre-Registration Rewards: there are no restrictions.
The new eligibility criteria for claiming 10 Million Global Pre-Registrations Reward: Adventure Rank 10 or above.
Travelers who meet the new eligibility criteria can claim the rewards distributed via in-game mail. (Travelers who already claimed these rewards will not receive them again.)”
■ Bug Fixes

Any cookies that may not be particularly necessary for the website to function and is used specifically to collect user personal data via analytics, ads, other embedded contents are termed as non-necessary cookies. It is mandatory to procure user consent prior to running these cookies on your website.